Rings of Power: Whose Body Is Galadriel Mourning In The Latest Trailer? The latest Rings of Power trailer foretells of death and destruction, in more ways than one. There are several scenes of separate explosions in the trailer, including one that looks like a Numenorian ship burning in the harbor, and one that seems to be the aftermath of the battle against the orcs. There’s the previously seen red vision of Galadriel with all of the dead floating elves, which isn’t necessarily expanded upon, but is at least given more clarity, as the new trailer later releases shots of a burnt down village covered in ash.

Galadriel appears in both scenes, but one appears to be an actual experience of living through dragon fire, or perhaps that of a Balrog, as she wakes up in the scene covered in ash, and the other appears to be a terrible vision of a war to come, and the fall of her people to some terrible fate. This leads on from the opening moment in the trailer of a monumental pile of elven helmets from some sort of war of battle.

But possibly one of the most harrowing scenes of death and of loss in the latest trailer, although it is only a short glimpse, is that of Galadriel stood over a body bathed in light, mourning. As the scene zooms in upon the tears falling down her face, the audience is left with Tar Miriel’s words “it is here Galadriel. The moment we feared.” So who could this mystery elf on the table in front of her be, and why has his death affected the golden lady so drastically? 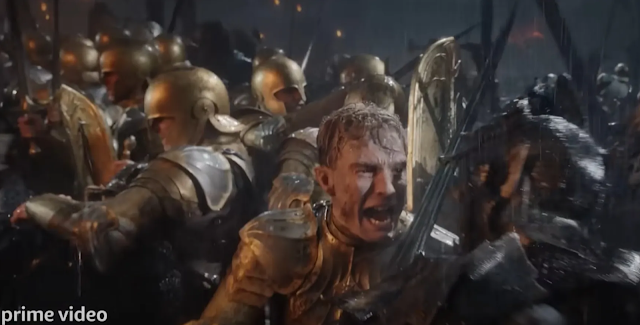 There are several clues that have led the audience to believe that the deceased is none other than Galadriel’s older brother Finrod. The first hint that this could be Finrod comes in quick succession within the trailer, where the scene of Galadriel mourning the body flashes back to a shot released in a previous trailer. This prior moment depicts a blonde elf fighting in a great battle, yelling out in anger or pain as a hoard of orcs slays elves all around him.

When this scene was first released in the earlier trailer, people once again assumed that this was Galadriel’s brother, fighting in the War of Wrath, and having this scene run in parallel with that of Galadriel standing over a very similar-looking blonde elf’s remains creates the link that these two scenes are related, and that the male elf in both shots is one and the same. This does raise some questions over whether Finrod will die in the great battle, in which case, his might be the helmet that Galadriel is seen placing on the pile at the start of the trailer, or whether her brother will die as he does in the books, but either way, the trailers are looking more and more likely that Finrod is the unidentified figure.

The second hint does actually fall in line with the canon, in terms of the large claw marks that appear on the deceased elf’s arm. Whilst these could be chalked down to a particularly vivacious orc, or an unusual type of blade that could have sliced into the warrior's shoulder, the marks are far too reminiscent of wolf claws to go unnoticed. In the original tale in the Silmarillion, Finrod is captured by Sauron and kept in a dungeon, alongside Beren, the famous ancestor of Aragorn and Arwen. During the quest to reclaim the Silmaril’s, Beren is set upon by a werewolf, and Finrod jumps into harm's way to protect his brother in arms. Finrod defeats the creature, thus saving Beren’s life and fulfilling their family’s oath, but sustains a mortal wound in the process, and later dies of it. The glimpse of just such marks on the body Galadriel mourns seems far to loaded to simply be a coincidence. 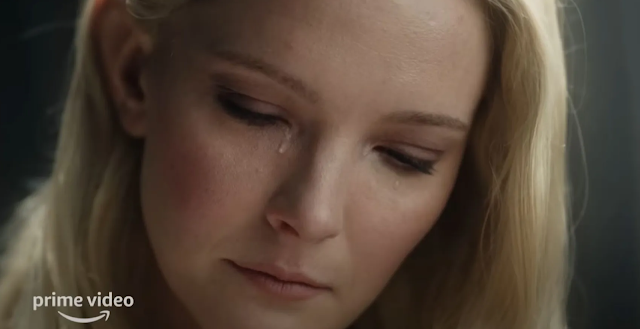 This is furthered in one final but very noticeable detail. The body on the plinth has been laid out ceremoniously, as is fit for a warrior of such standing, and is subsequently holding his weapon. This weapon is a gold and silver gilded dagger, which is the same one that Galadriel is seen holding in scenes in previous trailers, and in her first look promotional poster. It is possible that this dagger is a family design, which Galadriel and all of her siblings have an identical version of, tying them in strong bonds of love and valor to one another, or it’s possible that she takes the dagger from the body of Finrod when he is buried, and uses it in her subsequent battles as a way to honour him.

This feels very true to the symbolism of weapons in Middle Earth, in the same way that Aragorn carries around the shards of Narsil to remind him of his bloodline and his responsibility to rule Gondor, or the way that Bilbo gives Sting to Frodo, as a token of luck to keep him safe.