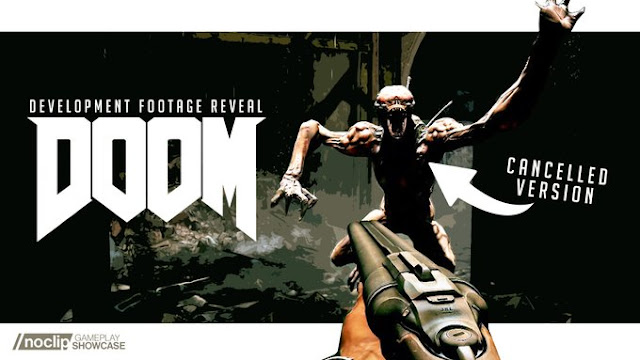 Back in the days when Bethesda was still hyping up Rage's megatextures, id was working behind the scenes on a version of Doom 4 that looked a whole lot different than the successful reboot(opens in new tab) we eventually got in 2016. This Doom 4 took place on earth, prominently starred characters other than the recognizable Doom Slayer, and had the feel of a modern Call of Duty game. It was eventually canned in 2013 for, among many things, being too "Call of Doom"(opens in new tab).

For years, the most we'd seen of that iteration of Doom was a leaked CG trailer(opens in new tab) establishing its war-torn look, until gameplay from the cancelled Doom 4 project appeared in Noclip's 2016 Doom documentary(opens in new tab): a brief corridor crawl and melee brawl featuring a shotgun, human-like demon hybrids, and melee combat.

Today, as part of an ongoing 'game preservation mission,' Noclip released a clean, unedited version(opens in new tab) of the Doom 4 gameplay originally shown in the documentary. Also showcased are bits of in-development footage from the rebooted Doom 2016, including early versions of glory kills.

Reflecting on the cancelled project, id maintained that Doom 4 would have been a game fans enjoyed, but felt the studio's efforts were better spent on a version of Doom that more closely followed the series' original formula: hell, speed, and the one-man-army that is the Doom Slayer. We now know that this strategy paid off, which may have helped convince Bethesda to bring "Call of Doom" out of the shadows years later.

This is the second time in as many months that Noclip has shared gameplay from cancelled games for the sake of posterity. In May, the channel released an hour-long look at Ravenholm(opens in new tab), the cancelled Half-Life 2 spinoff developed by Arkane in the days before Dishonored.