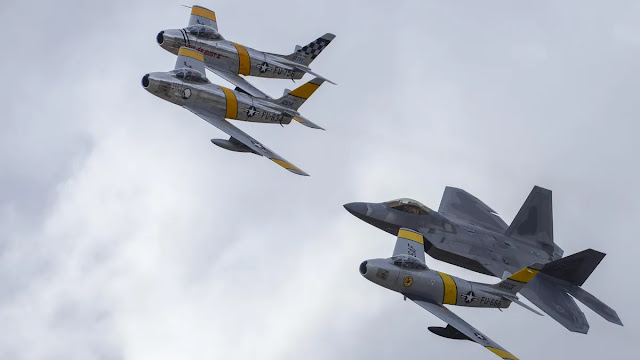 The US Air Force was a thing long before we knew it by that name.

For 40 years, from the do-it-yourself days of the Wright brothers through the hellish aerial combat of World War II, the American military flew scores of different aircraft and thousands upon thousands of missions. But in large part those flyers served as members of the US Army. (No disrespect, of course, to the many pilots of the US Navy. Here, though, we're focusing on the branch dedicated to air superiority.)

Then, two years after the end of World War II, came the National Security Act of 1947. The act, which President Harry Truman signed on July 25 of that year, decreed that the Air Force should be its own separate branch of the US military, effective two months later, on Sept. 18.

Thus the US Air Force was born at the dawn of the era of jet planes, nuclear weapons and supersonic flight. This year marks the 75th anniversary.

It had barely begun its new bureaucratic existence when it recorded a remarkable aerial achievement: Capt. Chuck Yeager breaking the sound barrier in the X-1 aircraft, in October 1947. But more workaday designs were the norm, like the older C-47 Skytrain, an emissary of hope and rations for those bottled up in a divided city during the Berlin Airlift, and soon the B-36 and B-52 bombers, avatars of the Cold War doctrines of massive retaliation and mutually assured destruction.

In more recent decades, the Air Force has been at the cutting edge of aviation with stealth aircraft including the F-117 Nighthawk and B-2 Spirit, with the Predator and Reaper drones, and with the secretive X-37B space plane.

The first slideshow here takes a look back through 75 years of US Air Force aircraft. The second, below, features the 40 years of aircraft that came first.