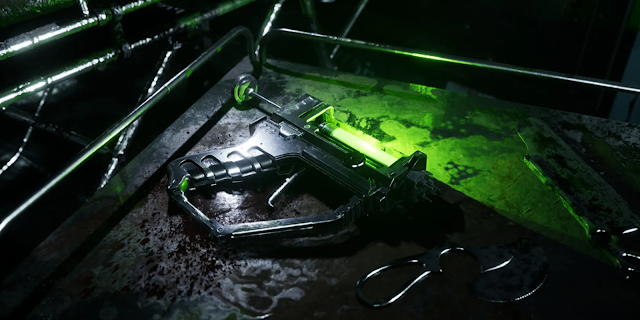 There is no shortage of crafting survival games on PC and consoles. From Don’t Starve Together and The Outer Wilds to the more realistic The Long Dark and the horror-tinged experiences like The Forest, there is a survival game for virtually every taste.

The newly announced Serum fits squarely into the horror camp. The first release from freshman studio Game Island, it thrusts players into a world of overgrown ruins, bizarre mutations, and glowing green drugs. Horror and survival game fans got their first look at this upcoming title in a brief announcement trailer earlier today. And while the announcement trailer is only 39 seconds long, it offers a few glimpses of Serum’s setting and gameplay.

The trailer opens with a man in a surgeon’s gown lying dead on the bloody floor of a dimly lit room. A bloody trail begins at something resembling a barber’s chair and runs off-screen. The trailer then cuts to the first-person viewpoint of Serum’s protagonist as they clamber through the rubble of a partly collapsed building. The trailer soon introduces viewers to the titular Serum, which causes the protagonists’ veins to light up green as they inject it into their arm. The following clips showcase a foggy wood, dilapidated house, and the ruins of a town full of mummified corpses and mutant bugs.

The first proper gameplay segment comes right after the 13-second mark. It shows Serum’s protagonist scanning the environment with a handheld device, highlighting nearby resources. After a cut, they discover a tube of the Serum lying at the feet of another corpse. The following clip shows them running through the forest and fending off mutant wolves with a makeshift spear before another cut brings them into contact with a seemingly docile giant toad. The final clips take viewers back to the beginning with dead scientists, spilled Serum, and the protagonist emerging into the daylight for the first time.