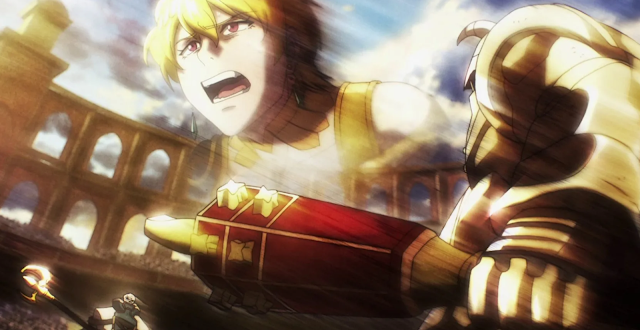 The third episode of Overlord IV focuses mainly on the human actors in the region reacting to the movements of Ainz Ooal Gown and the Sorcerer Kingdom. Jircniv Rune Farlord El-Nix, Emperor of the Baharuth Empire, having witnessed the power of Ainz on the battlefield first-hand, decides to conspire with various other human factions to have the newly-emerged Sorcerer Kingdom destroyed. However, it is this first-hand knowledge that makes the Bloody Emperor ultimately come to understand one truth: he cannot outsmart Ainz Ooal Gown.

The previous episode set up Albedo's activities in Re-Estize, as well as an upcoming secret invasion of the human Kingdom by the Sorcerer Kingdom. This episode continues Overlord IV's foundational atmosphere, showing the toll of the stress of existing as a human in the wake of the Sorcerer Kingdom's establishment, especially after Ainz's single-handed defeat of 70 000 of the Kingdom of Re-Estize's military numbers at Jircniv's request.

The event known as The Massacre on Katze Plains refers to an incident which occurred during one of the annual skirmishes between forces of the human factions of the Kingdom of Re-Estize, and the Baharuth Empire. The Baharuth Empire, led by Jircniv El-Nix, settled on waging annual wars with the intention of slowly wearing down the military might of Re-Estize; however, with the help of the newly formed Sorcerer Kingdom, Baharuth waged war with Re-Estize over the city of E-Rantel, which is now under Sorcerer Kingdom control.

The incident saw the deaths of 70 000 enemy units, but when Ainz summoned the Dark Young, Level 90 monsters from Yggdrassil to massacre the Kingdom's Army, the Imperial Army's horror at the incident led them to run away from the battlefield, trampling each other to death in the process. The Slane Theocracy, one of the oldest human nations of the New World, fears the undead, but even more so when the Thousand Leagues Astrologer, the 7th Seat of the Black Scripture of the Slane Theocracy, falls into despair after her precognition of Ainz's actions on Katze Plains. 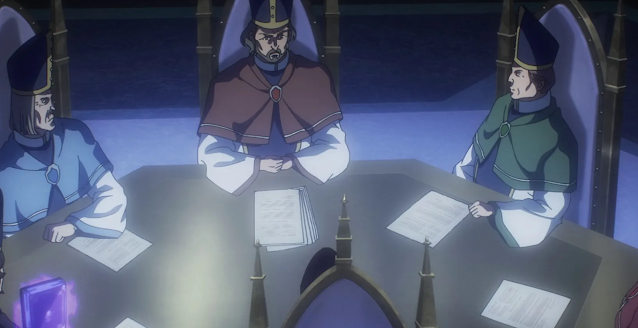 The Slane Theocracy believes in human supremacy, and cannot accept the emergence of a kingdom of inhumans, particularly one that poses as much as a threat as one led by Ainz Ooal Gown. The Six Cardinal Leaders of the Slane Theocracy host a meeting in which they discuss the way forward, deciding that they cannot let the Sorcerer Kingdom exist. This decision is also inspired by the descent into despair of the Thousand Leagues Astrologer, whom they believe saw a horror far worse than anything conceivable, rendering her unable to leave her chambers. This also prompts their holding of a meeting with various other human factions, namely the aforementioned Emperor Jircniv of the Baharuth Empire, but also the religious territory of the Roble Holy Kingdom, which neighbors the city of E-Rantel; and the Argland Council State, a nation of demi-humans located northwest of E-Rantel whom the Slane Theocracy want to be allied with due to their proximity to the city.
Tags
Anime Overlord IV Episode 3 Review
İlgili Konu